skip to main | skip to sidebar

And a Spaz-tastic Time was had by All… 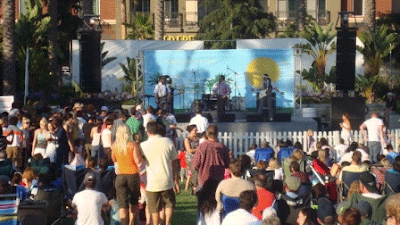 The Spaz-fanatics were out in record numbers this year for the Concert at the Park Series featuring totally tubular ‘80s band, The Spazmatics.

There was a traffic jam on the make-shift dance floor in Concert Park with Playa Vistans of all ages in a dizzy “Bohemian Rhapsody.” The Spazmatics’ rendition of Billy Idol’s “Rebel Yell” had the crowd chanting for, “More, More, More!”

The cheeky, geeky band with their plaid pant guitar player and neck brace adorned front man finished off their set with a uniquely fabulous version of Bonnie Tyler’s “Total Eclipse of the Heart.”

Look for the next summer concert in July with Dr. Bobby Rodriguez.
Posted by Makena Riley Kashiwai at 4:26 PM